Just posted this on facebook! I am involved in so many events this week its just bonkers. I need a vacation.

Events happening this week that YOU should come to because I am either in them, they are awesome, fun, enlightening and inspiring. ❤

Wednesday – Meet and Greet at Pearl Street for all the young preservationists at 8pm with Mike Puma and many others!
AND
A Party for the PRESERVATION GENERATION is at SOUNDLAB from 9 – 12. Jillian Mertz is djing and we are showing sneak peeks of John Paget’s new films. $10

http://www.facebook.com/event.php?eid=101421713302623&ref=ts
Thursday – I am playing my first show in a year (AT SEA) / Sean’s Going Away Show at Sugar City. Also, Sean Mikula and Alex Berkley haven’t played in Buffalo in FOREVER. Come out, listen, love and show support!!!

Friday – Buffalo Unscripted: A City Speaks is happening at the Market Arcade and Chris Hawley and i will be speaking along with several other fun people. This is the event of the week because the film is all about how amazing buffalo is. You may be inspired so much you will cry.

Saturday – Bike Tour across Buffalo starts at 8am with David Torke. An open air bus tour is happening too!

AHHH! I cannot believe the National Preservation Conference will be here in two days. I am so excited!

The Campaign for Greater Buffalo is having TWO events this week during the conference to highlight preservation in Buffalo. It is going to be so much fun!

Tomorrow is the awards ceremony featuring some seriously inspiring buffalo people who have helped to preserve buildings.The awards will be given at the WNY Book Arts Center in downtown Buffalo. 7 – 9pm. Free and Open to the public.

Wednesday is the event that Chris and I have been planning- The Party for the Preservation Generation. We have a DJ and its at soundlab. We are showing a sneak preview of a new John Paget film too! It will be so much fun! 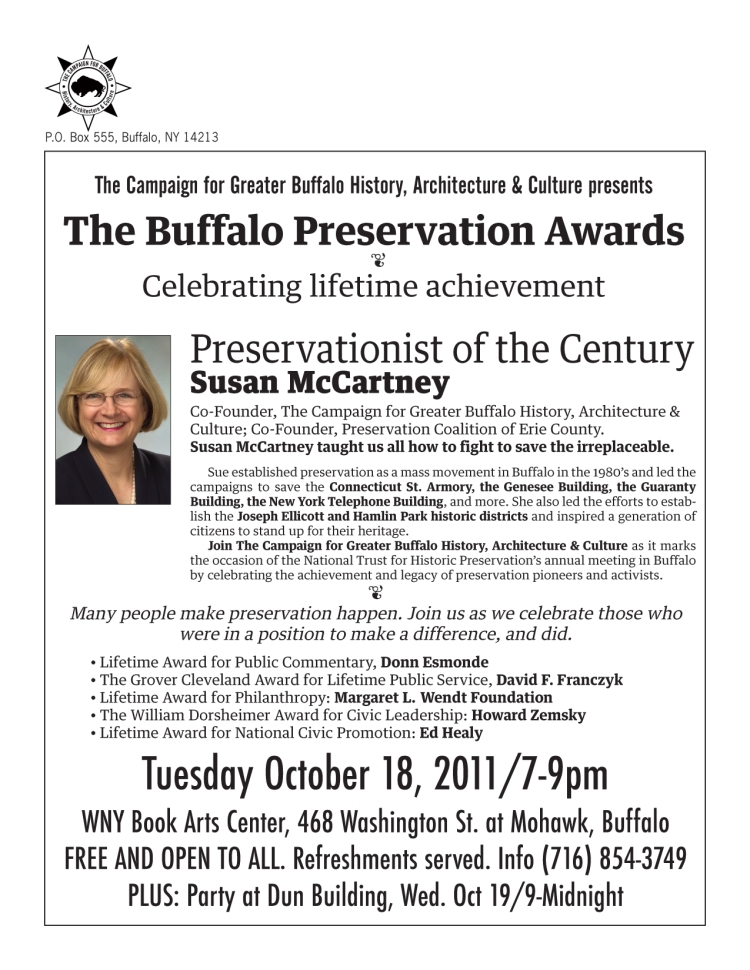 Yesterday I had the wonderful opportunity to attend Ted X Buffalo. The event is based on TED talks which are focused on sharing ideas. Every speaker has 18 minutes to get their idea across – which is a very short amount of time.

Each presenter spoke whole heartedly and passionately about their ideas which ranged from beer drinking, storytelling, education, sustainability and land use patterns, choosing quality over quantity, music and taking a stand for what you believe in. Each speaker shined with passion, innovation and love for their idea. Remy DeCausemaker stated “Building on the efforts of others is progress” and wow, that quote was truly reflected throughout each idea presented.

I can’t even begin to quote or explain each presentation however I will say that at least one almost brought me to tears. Stacy Watson, creator of Drop In Nation talked about the importance of what happens to students when they drop out and shared her experiences and success with Ted X Buffalo. She learned that teaching educational material is only one piece of the puzzle and the rest is about self esteem and showing a little love for each student. It hit home for me as I thought about all the teachers that helped me along the way because if it wasn’t for them, I am not sure where I would be right now. That’s the whole hearted truth.

Leaving the room, I felt empowered and idealistic – almost that I too can do something to change the world. Thank you for all the Ted X Buffalo organizers – little do you know how far the goodness of this event will spread.

If you do not have a twitter or facebook, I strongly urge you to get one.The news just isn’t covering all that needs to be heard about this movement.

Today, Boston had a 10,000 person march on Congress street. They marched and shut down the interstate.This morning, I saw about 10 people camping outside of City Hall in downtown Buffalo “occupying” Niagara Square. This weekend, Buffalo saw over 300 people gather – all organized through online social media. This Saturday, the world will be “occupying” in an attempt to gather across the globe and unite about one issue – the 1% hold more power than the other 99% because of their wealth and now finally, the 99% are taking a stand.

Many stories of the 99% vary from health care issues with no money to take care of them, outrageously high student loan debt , outcry of being unemployed or under employed, spending billions on a war.. there are so many issues but they all are equally important and all represent what 99% of America is feeling. There is no way to disregard what the 99% are saying because their issues are REAL and everyone can empathize with them. We know the issues exist but we have continued to ignore how large the issue has become – UNTIL NOW.

Here is my story:

I am one of the lucky ones. I have a job that pays me decent (under 35K though!) and they include health care benefits. I don’t have the ability to save much and when my student loans kick in in December, I will be hurting to save anything because 25K in debt is hard to pay off quickly. I don’t want to live that way. I hope to remain healthy because I cannot afford to not be. I want to be able to afford to save to buy a house but cannot. And as for kids, I would never raise them in the current environment and economy. Its far too stressful for me and I don’t want to worry about someone else. I am one of the LUCKY  99%.

Lastly, I had the opportunity to go to the Occupy Buffalo movement at City Hall this weekend and here are some of the photos I took.

Wow, this weekend was such a fun experience!

Saturday was the Green Building Tour which included 45 sites across Western New York. The kickoff award party went off well, we gave prizes, awards and had a lot of fun. Channel 4 showed up to cover it, which was great.

As Chair of this years tour, I couldn’t have done it without all the help of WNYSEA and our sponsors. We really had a dedicated crew this year. I still can’t believe it was the biggest ever in Buffalo and the biggest in New York State.. amazing what little ole Buffalo can do!

The tour went well, we had 1300 hits on our website on Friday and Saturday alone  which indicates a really good turn out.I had the opportunity to go to several sites, all of which were inspiring and very busy!

I attached some photos and a video of the event. We are still waiting on the photographers photos so pardon the picture quality.