Portsmouth, New Hampshire is a quaint town that sleeps in the winter and thrives in the summer. I am quite lucky to have had the opportunity to see this city during both perspectives.

Portsmouth decided a while ago to add a giant parking garage and hotel right in the middle of this town but in a way that it blends in with it’s character and allows for the tourists to park their cars in one location and walk around to several blocks without feeling like you are miles away from the car. I liked their parking garage actually because it’s close to everything but still doesn’t deflect from the street, doesn’t alienate the tourists or take away the historic feel of the city.

Also, I wanted to note that I saw a 1975 drive through bank that even had synthetic slate for its roof just to fit the character of the area. Preservation in 1975? Crazy. Love it!

So here are a couple photos I snapped while walking around his morning. A charming town that screams new England.

Important note:
They also have a brewery that I would like to dedicate a post to in the future called the Portsmouth Brewery.
Brews and food are a normal thing but breweries that sell food are popular everywhere. It’s sad to see buffalo have one (pearl street ) when we should have at least five… But that’s for another post on another day. 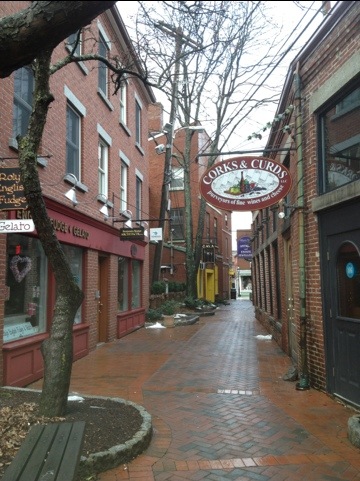